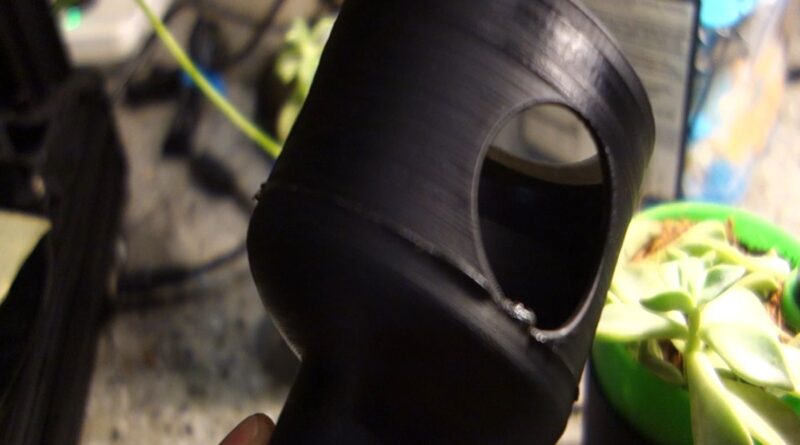 Our washing machine and spin dryer drain directly onto the floor of our our side balcony where there is only one drain hole. Whenever we do a load of laundry, the balcony floor gets wet which is very annoying. Well, I decided to put my newly acquired 3D printing skills to use and make an adapter which allows me to stick the two drain pipes into the one drain.

Here’s the drain and the two drain tubes – one from the washing machine, the other from the green spin dryer on the left.

Here’s the drain adapter drawn up in 123D Design. It took me a few hours to make since I’m just learning how to use the software.

The design loaded up on the computer at a local makerspace.

Printing the part on an Atom 3D printer. This delta printer looks so cool. It’s fascinating to watch this thing print!

The part is slowly taking shape. Hawke, the guy overseeing this printer, helped me speed up the print so I wouldn’t have to wait around so long. The print had a glitch near where the dome shape begins and Hawke had to stop the machine and make some adjustments. He edited the raw G-Code file to allow the final print to the end.

The completed part. Not the prettiest thing. Oh well. Total cost for this part came to about $5. You just weigh the part and they calculate based on weight.

The 3D printer savior, Hawke! Thanks Hawke for saving my print!

Here’s the drain adapter installed. The holes for the drain tubes were a bit small so I first had to enlarge them a bit by filing down the insides.

A blurry shot of the bottom part of the adapter.

The drain adapter set into the hole. It fits nice and snug. Just right!

Tested the adapter by running water through the tubes and it works just fine! Yeah!

Watch the video of the process here: