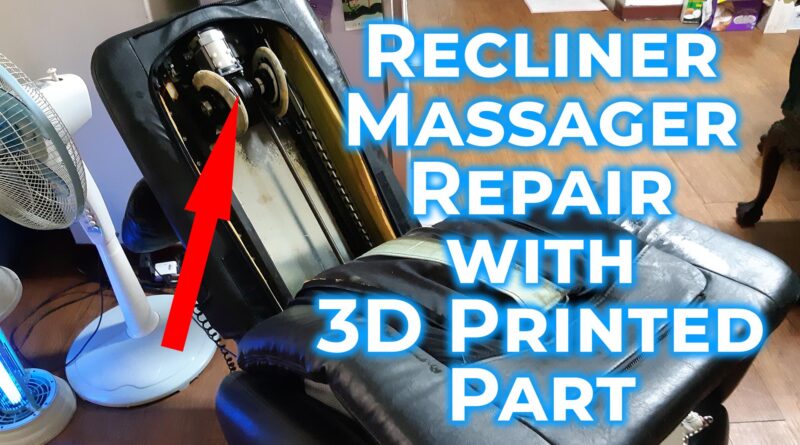 An old recliner sat unused in our living room for the longest time because it was missing a handle to operate the legrest and the back massager wasn’t working. After fixing the legrest it was time to tackle the back massager. I knew it wasn’t going to be an easy fix, but it was either that or dumping the recliner, which would be a waste. This fix used 3D-printing (again!) to fabricate a part and it was the most complicated and involved one for me thus far but it was also the most satisfying.

Here’s the old recliner with the back massage unit exposed. When turned on, the motor would spin but you just wouldn’t get a massage.

The gearbox that joins the motor to the massaging discs broke into a number of pieces. Everything was barely held together by mounting screws on the base of the unit.

Inside the gearbox is a gear driven by a worm-screw attached to a motor. The gear drives a shaft that has two discs attached to it at an oblique angle. When the shaft rotates the two discs they will wobble around giving you a massaging motion on your back. Since the gearbox was shattered, the worm-screw couldn’t engage the gear so the discs wouldn’t turn.

The motor was mounted to the back of the recliner so I left that there. I took out massager assembly and gearbox for further inspection.

The gearbox, which appeared to be made out of polycarbonate, was shattered. The section holding the massage unit broke away from the faceplate that attached to the motor. I tried searching online for a part like this but since the the recliner is easily 20 years old, I wasn’t holding out much hope. Of course, none was to be found.

The Solution: A 3D Printed Part

I considered gluing everything back together with either superglue or epoxy resin, but there were missing pieces of plastic so the whole thing probably wouldn’t hold together. My only option left was to try to 3D-print a part. Yeah!

I’ve already repaired the recliner handle, a door knob, rice cooker, swimming goggles, and a refrigerator door using my trusty Prusa i3 3D printer but these were all relatively simple and easy projects. This gearbox would require some major design work and prototyping on my part and would be the most challenging design for me thus far.

The Plan of Attack

Since there were, literally, so many moving parts in this build, I decided to design the part in pieces and test them for fit before assembling into one final piece. There were three sub-assemblies that needed to be designed and test-fitted:

After taking some measurements of the broken gearbox and making a quick sketch, I cranked up Fusion 360 and got to work.

The first sub-assembly I made was the baseplate. This part anchors the gearbox to the frame that attaches to the recliner and should have been easy to design and prototype. Turns out, I got the measurements wrong and my first prototype was too narrow as can been seen in the picture above. Luckily, this was easy enough to fix in Fusion 360 and I got something that fit the anchor holes just right.

Next up was to design the supports that would hold the bearings of the massage unit.

My first attempt was came up too small but my second prototype was able to fit the bearing. The second was actually was a bit too big, so I narrowed it down a bit so it would snap onto the bearing snuggly.

After I was sure the bearing holder fitted just right, I duplicated it and joined the two to form a gearbox. Then I merged that with the baseplate. Surprisingly, the first prototype fit like a glove!

All the screw holes aligned and the top cap could be attached with no problem.

Next was to design and prototype the third piece of the puzzle, the motor mounting plate.

Again, I took measurements off the original piece and cranked out a design in Fusion 360.

It took me two tries before I got the holes to align properly with the mounting bolts on the motor. Next was to join everything together and test fit the entire assembly.

I am still a total newbie when I comes to using Fusion 360. It took me a while to figure out how to properly join all the sub-assemblies I had created. Everything seemed to work and fit as individual parts but would it all work together as one unit? The only way to find out was to print it out and test fit it.

I printed out the fully assembled gearbox with a 15% infill, which took about about five hours to print. It looked pretty good.

Next was to test fit it.

Lots of Testing and Tweaking

Needless to say, it didn’t fit quite as planned. Though the shaft of the massage unit fitted fine into the the gearbox when it was off the recliner, it wouldn’t seat properly when the gearbox was anchored to the recliner. Turns out motor mounting plate was long by about 2mm and the anchor plate was short by about 2mm.

For the final print, I used a 80% infill so the part was practically solid all the way through. This, though, required more than 10 hours of printing. The first time I tried doing a final print, I left the printer running during the day and left the house. I came back in the afternoon to find that the top part of the print had shifted leaving an unusable part.

After all the testing and adjustments, the final version came out on the sixth try. I was having trouble bolting the prototypes do the recliner since not all the screw holes aligned. I modified the mounting holes in the final design to be long ovals to avoid this issue. Large tolerances make for happier installations!

I did one final test fit of all the parts to make sure everything connected properly.

With the gearbox sorted out, I needed to work a bit on the massaging discs. The white plastic covering the disc was brittle from age and was chipping off. I decided to take it all off and cover the massage discs with epoxy resin to restore a nice smooth finish to the discs. This was important because the discs rotate and rub against a cloth backing that is under the leather covering of the recliner back. If the discs were not smooth, it’d eventually wear through the cloth and leather upholstery.

After cleaning up the discs, I coated them with a layer of clear epoxy resin. This left a smooth, hard surface, which is what I wanted.

After the epoxy was cured, I installed everything into the recliner and tested all the massage modes to make sure all ran as it should. I was very happy to find out it did!

After zippering up the upholstery, I jumped into the seat and enjoyed a very nice back massage! Another broken piece of furniture fixed!

Here’s a video of the entire process: