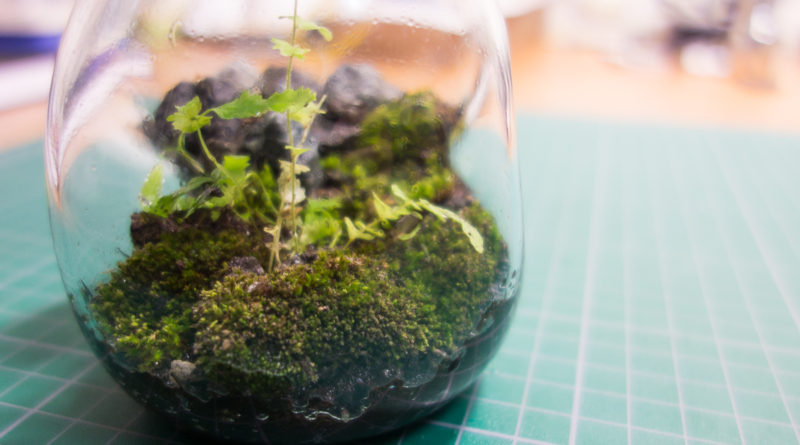 I love plants. I love gardens. There’s just something magical about seeing a green leafy thing happily growing and producing wonderful oxygen for us to breath.

Last week at a local nursery I saw plants being sold in small glass containers and that’s what inspired this particular project. I so happened to have a glass vase that I had made myself on a company outing to a glass factory and there just happened to be some small ferns growing out of a plant pot on my window sill. Perfect!

After cleaning up the vase, I put in some gravel to provide water drainage and then a handful of potting soil.

I made sure the vase was dry on the inside before adding anything for fear of dirt sticking to the sides. Since the vase has some sharp curves I knew it’d be hard to clean the insides so I figured it best not to get it dirty in the first place. I rolled up a piece of scrap paper into a cone to funnel the dirt inside. I intentionally sloped the dirt to provide a bit of visual interest.

Next to go in was the plants. I had some small ferns pop up in a potted plant on my window sill and there just so happened to be some moss growing on the rooftop of my apartment. I broke the moss into little pieces and stuffed them into the vase to cover the dirt. A chopstick came in handy to arrange everything inside. After pushing in some small ferns in between the pieces of moss, I added some rocks on top.

After everything was arranged and in place, all that was left to do was add water. This I did by using a straw like a pipette. I added just enough water to have a little bit of it pool at the bottom of the gravel. After an hour, the dry moss started soaking up the water and turned a bright green.

This thing turned out beautifully! It now sits on my desk providing a nice miniature view on nature without having to go outside! My own Zen space in a bottle!