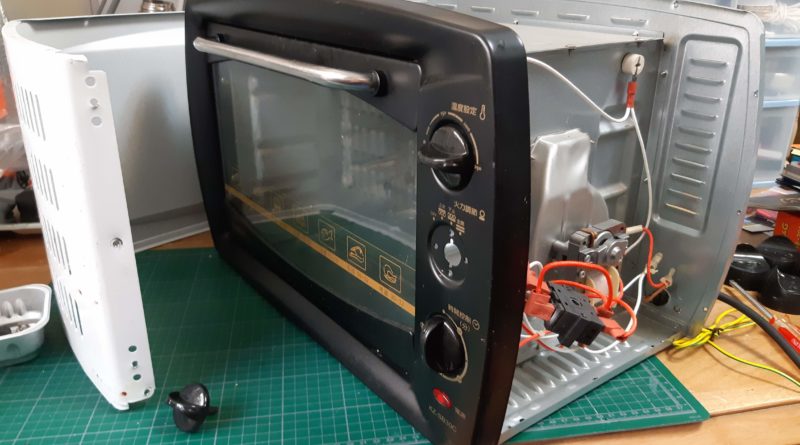 The cheap toast oven we’ve been using for nearly two years finally died on us. The heating elements simply would not heat up. Since something like this is so cheap, it’d usually be tossed into the garbage heap and you’d go buy a new one. But that is just so bad for the environment. Even if you were able to recycle a lot of the material, there inevitably will be stuff that can’t be recycled and so would end up in a landfill. Being the environmentally conscientious do-goody that I am, I just had to fix this or at least try.

After busting the oven open, I discovered the rotary switch that controls the heating elements was fried. I was careful to mark on the wires which part of the switch they attached to so I could plug them back in correctly.

The name Hualiai and a part number — FZ31-9 — were on on the switch. I fired up my web browser and found a Chinese company named HUALILAI that featured the exact part I was looking for on their website. Now that I had the name of the company in Chinese, I could search for that next.

I search the Chinese website taobao.com using the Chinese name of the company and, to my surprise, I found someone who was selling what looked like to be the exact part needed.

The listed price was only around $2, so I went ahead and placed an order for it. With shipping here to Taiwan, I ended up paying less than $6 for everything. Sad that the shipping cost more than the part itself.

A week after ordering it, the switch finally arrived from China. Everything looked to be exactly the same as the old one.

Because I labeled all the wires before pulling them off the original switch, everything went back together very smoothly.

After buttoning everything back up, it was time to test!

The elements heated up as expected! It worked!

The only major issue encountered was that the indents of the new switch doesn’t line up with the indicator markings on the control panel. To correct this, I just painted a white dot that corresponds with the proper setting.